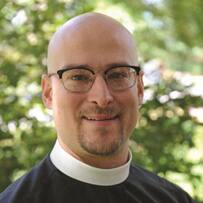 The Reverend Ryan R. Whitley is both a cradle Episcopalian and a native Floridian. Fr. Ryan, as he likes to be called, grew up in Fort Myers attending St. Hilary’s Episcopal Church and it was there that he first heard God’s call to the ordained ministry, through his fellow parishioners, his peers, and the diocesan youth ministry of Happening.

After graduating from Wake Forest University with a double major in History and Religion, Fr. Ryan headed to Seabury-Western Theological Seminary in Evanston, IL. He spent his senior year of seminary as the Seminarian Intern for St. Luke’s Episcopal Church in Evanston, where he grew to a deeper love and knowledge of the church’s traditions in liturgy and music.

His first call was back in his home state of Florida, serving as the Curate at St. Mark’s Episcopal Church in Tampa. It was while he was serving at St. Mark’s that he met Elise Woodroffe, the woman whom he would wed, at DaySpring Conference Center in Ellenton while attending a Vocare weekend.  (Coincidentally, Elise was baptized at St. Thomas!) In 2009 they were married by Bishop Dabney Smith and in 2010, Ryan was called to be the Rector of St. George’s Episcopal Church in Ardmore, PA.

While there he served as the Dean of the Merion Deanery, and as the Bishop’s representative to the Religious Leaders Council of Greater Philadelphia, an interfaith body made up of the adjudicatory heads of over 30 faiths, as well as being the Diocesan Ecumenical Officer.  He has served on the Diocesan Liturgy Commission, as well as Diocesan Council.  He has been a past President of the local ecumenical ministerium,  and a past Treasurer for an international collegial fellowship of Episcopal clergy called the Society of Catholic Priests (catholic in this sense meaning “the church universal” rather than “Roman”).

Currently Fr. Ryan is the Dean of the St. Petersburg Deanery, serves as a member of the Standing Committee, and is the Diocesan Ecumenical Officer. He also is a member of the Society of Catholic Priests, a collegial organization for priests, deacons, and professed religious (think monks and nuns) in the Episcopal Church which has a focus on Anglo-Catholic (universal, not Roman) Evangelism and priestly spirituality.

Fr. Ryan is a very dedicated baseball fan, rooting for his childhood team the Atlanta Braves in the senior circuit, but of course, for the Tampa Bay Rays in the American League!  He also enjoys reading and discussing fiction, and loves playing recreational softball.
Ryan and Elise have been blessed with two beautiful, young children, Jackson and Caroline.  They are all excited to be back home in Florida and are thrilled to serve in the wonderful community of St. Thomas' Episcopal Church. One of Ryan’s favorite scripture passages is John 10:10, “I came that they may have life and have it abundantly.”   His prayer is that the life of Christ may be made manifest in each and every person’s heart, mind, and soul at St. Thomas, and that that abundant life would spill over into the surrounding community and beyond,